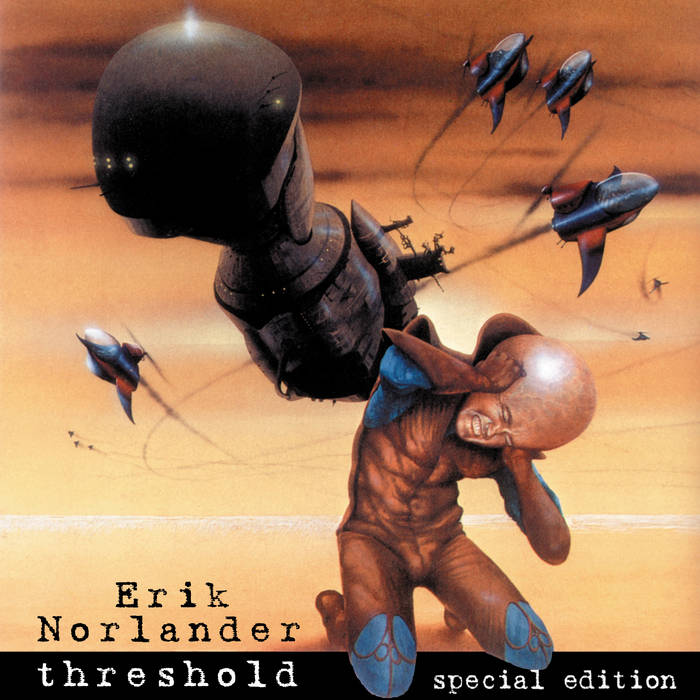 When it was originally released in 1997, Erik Norlander's debut solo CD, THRESHOLD, turned heads and gathered praise from the press and fans alike. With liner notes and a glowing endorsement from prog keyboard guru Keith Emerson, THRESHOLD stood apart from the many other solo keyboardist albums that flooded the market. Erik's strong compositional vision, state-of-the-art production sensibility, command of vintage technology and masterful keyboard technique permanently burned THRESHOLD into progressive rock history. Virtuoso keyboardist Erik Norlander was joined by drummer / percussionist Greg Ellis (The Matrix films, 300, Argo, Iron Man, Vas) and bassist Don Schiff (Rocket Scientists) to create a prog rock power trio that sought to evoke the depth and range of past greats such as ELP, Rush and Cream.

In 2003, Erik assembled an astounding 2CD reissue of THRESHOLD complete with 10 (!) bonus tracks. The whole album was remastered using the world's best studio equipment including vintage Telefunken and Pultec devices collected and meticulously restored by Erik.

I am quite pleased to welcome you to this rather nice Special Edition of my debut solo CD, Threshold. This album was made back in 1996-1997 with the sole intention of doing something FUN. But perhaps that's indeed the magic. In the years since, Threshold has happily been embraced by fans and critics alike ... much to my surprise!

When I started these recordings, I had no idea that others would enjoy this music which to me is often experimental, sometimes indulgent and always progressive (there's that word again!). However, in recent years, I have made it a point to include at least one song from Threshold in my live performances either solo or with Lana Lane or Rocket Scientists. And many times I end up playing more than one song. So this FUN music has by evidence stood the test of time ... at least so far, anyway.

I brought in friends Don Schiff and Greg Ellis to expand the sound of Threshold with a real live pro rhythm section, and I have to admit that I was a bit shy about asking them. After all, this was a FUN recording, remember? But I was again surprised by the enthusiasm they had for this music, and the two pointed out unique elements and interesting dichotomies that I had not seen myself. Perhaps the most interesting is the contrast of man and machine. This is, for all intents and purposes, a synthesizer album. But it is indeed NOT a mechanized, quantized, soulless blob of techno glop. Quite the contrary, on Threshold you will hear three actual musicians playing real music. And musically speaking, the fact that my instrument happens to be the synthesizer is almost beside the point!

1997 liner notes to the original CD release by Keith Emerson:

Just why so much controversy surrounds people that play this sort of music is beyond me. Personally I think they deserve a medal for dogmatically persevering with virtuous style while struggling obstinately with antiquated, vintage keyboards that require the steady hand of a Chinese artist painting on a grain of rice, to operate. Although Threshold does not set out to be controversial it nevertheless enjoys taunting it's edges while remaining firmly inside the boundaries of acceptability. As a result new life flows through the veins, valves, oscillators, and acoustic hammers of Erik Norlander's circuitry.

Drama punctuates Threshold's opening statement with "Neurosaur". Complete with quasi gothic introduction followed by a menacing minor riff that develops some interesting time shifts - so subtle they go by without a major disturbance in the scheme of things. Have no doubt. There is a scheme to the whole thing. Evident by re-occurring motives and sounds that come back to haunt you like a long gone, loved relative.

There are suggestions towards folk elements-particularly in the fourth track "Neuro Boogie" which employs the use of a modified Hammond Model D. There are suggestions towards Latin elements and Heavy Metal. If this sounds eclectic, Norlander manages to be so without the whole thing becoming contrived. When Threshold leans, it's towards an impetuous insistence that there can be repetition that's mercifully not of the Philip Glass variety. "Viva le difference". The album completes itself as majestically as when it came in with the conclusive "Critical Mass". As the banners fly, let 'em fly gloriously over the 'Threshold'.