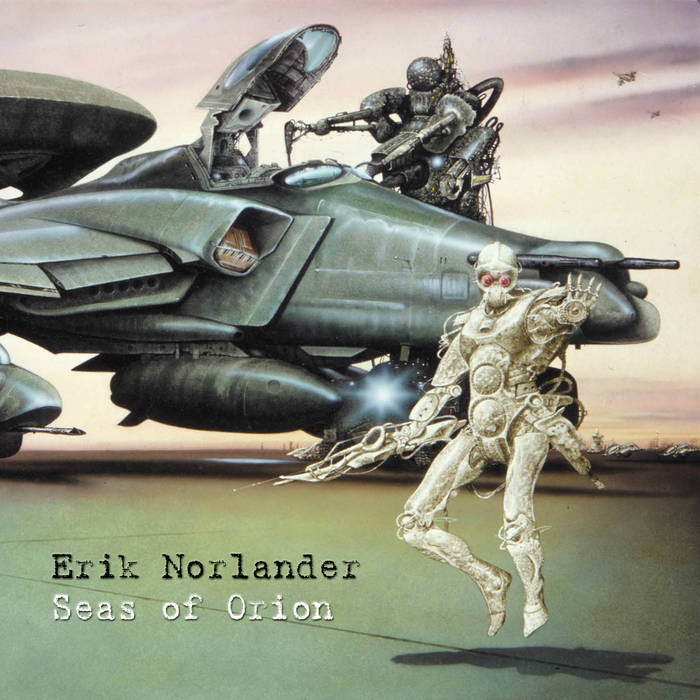 (Los Angeles, 28 August 2004) Master synthesist and composer Erik Norlander makes a triumphant return to his electronic roots with his new instrumental CD entitled SEAS OF ORION, a six song full-length album of magnificent proportions. From the subtley atmospheric to the sprawlingly epic, Norlander recorded SEAS OF ORION in the spirit of the electronic greats of the 70s using only synthesizers and percussion -- no guitars, no vocals, no piano, no organ -- in a beautiful melange of electronic soundscapes, kinetic grooves and emotive leads.

SEAS OF ORION harkens back to Norlander's 1997 debut album, THRESHOLD, which was reissued earlier this year as a 2CD Special Edition via Norlander's Think Tank Media label. And like THRESHOLD, SEAS OF ORION features percussionist Greg Ellis (Vas, The Matrix films) again delivering his well-known and unique blend of world ethnic percussion and western progressive jazz drumkit rhythms. Ellis is a strong proponent of "organic rhythm" -- rhythms played by humans for humans -- and that propensity comes through loud and clear on SEAS OF ORION. Another SEAS OF ORION link to Norlander's Threshold album is the astounding cover art by English science fiction artist Jim Burns. The cover art shows implies a melding of man with machine, a theme that Norlander and Ellis has explored in the past and venture into again with Seas of Orion.

Much of SEAS OF ORION was composed and performed on Norlander's gargantuan Moog modular synthesizer dubbed by fans as "The Wall of Doom". The label has stuck, and "The Wall of Doom" continues its mission as Norlander's primary instrument. Made up of discrete analog synthesizer modules mostly from April of 1967, the instrument is a real vintage gem and is truly among the first commercial synthesizers ever created. Norlander speaks about The Wall of Doom, "Originally built in 1967, the Moog modular actually pre-dates ME by three months [Norlander was born in July of 1967]. And when you consider that we had not yet put a man on the moon when this instrument was created, it puts quite a historical perspective on the synth." Norlander has toured extensively with The Wall of Doom, carting it across the United States and Europe from 2001 through 2004.

The music of SEAS OF ORION is progressive, and progressive in Norlander's own highly identifiable style. There are long, sprawling ambient passages, but there is also melody and groove. Norlander aims to keep the melodies memorable but never trite or overtly commercial and to keep the grooves infectious but never mindlessly repetitive or loop-oriented. Songs like "City of Living Machines" may indeed find their way to the club dance floor through their compelling blend of analog synth bass and organic drum and percussion undulation, but it won't be because of any targetted marketing effort. "I've never been particular drawn to dance music", says Norlander. "But occasionally we'll put together a piece that has a sort of club appeal due its rhythmic propulsion -- that's a phenomenon that I do not specifically intend but welcome nevertheless."

Probably the standout piece on SEAS OF ORION is the 22-minute epic, "Adrift on the Fire Seas of Orion's Shield" -- an awesome sonic event that could have easily come from the chambers of 70s electronic greates such as Tangerine Dream or Klaus Schulze. Norlander set out to create this piece with great intent. He writes in the album's liner notes "I tried three times to create the piece, and I abandoned all of these efforts. The problem was that I was thinking too much in terms of traditional songwriting." Norlander had a breakthrough the fourth time around when he changed his compositional approach and even his usual recording technique. "I had a breakthrough on the fourth time around when I took a completely different approach. I set up a phalanx of synthesizers in a circle around me, I set up tracks for each one, and I hit record. Many of the sounds were set to drone on without retriggering, by adding, subtracting and modulating these sounds, I was able to create the "living environment" that I was after." The epic journey begins with tension and anticipation, ebbs and flows to and from several climaxes, and finally winds down into a peaceful release when it segues into the next song, "Oasis in Stasis", a lush and moody song built over a cleverly long ostinato pattern, modulated by sequenced analog synthesizers whose envelopes and filters are constantly moving under the hands of Norlander's real-time performance.

The album ends with a wonderful cover of a classic electronic piece, the "Hymne" from Vangelis' 'Opera Sauvage'. Beautiful and triumphant, the melody of "Hymne" holds a special place in Norlander's heart. "My wife Lana and I were married to this piece" says Norlander. "We used 'Hymne' in lieu of the usual Wedding March." The wedding ceremony was many years ago, but the power of the song remains. It seems only natural that Norlander should offer his interpretation of the piece here on this electronic release.

Another piece worth mentioning is the opener, "Fanfare for Absent Friends", an emotive song that starts with a low, moody drone and builds to a triumphant fanfare played over both martial cadences and speedy rock grooves. Prior to the recording of SEAS OF ORION, Norlander was contracted to headline the 2004 Alfa Centauri Electronic Music Festival in The Netherlands. Norlander, along with festival organizer Eric Snelders, planned to release SEAS OF ORION at the festival itself -- combining the album's debut with a sort of live performance release party. The date of the festival had been planned for some time ... September 11, 2004. That fateful date of couse harkens back to the terrible events of 2001 when terrorists attacked New York City and Washington, DC. So when Norlander set about composing the album, he was keenly aware of the date on which it would be released. "I really wanted to do something special to acknowledge this date, and so I composed the album opener, 'Fanfare for Absent Friends' as an homage to those lost. But rather than make it a dark and sad piece, I chose to create a triumphant and uplifiting fanfare to honor the memory of the fallen. It is the lives of these people we should celebrate and remember and not their deaths."

Like all of Norlander's releases, SEAS OF ORION is masterfully recorded and exquisitely executed. SEAS OF ORION is Norlander's 5th solo album following closely on the heels of his new live CD, Stars Rain Down, recorded in Europe in 2001 and 2003 and already garnering extensive critical praise from the press and fans alike. Norlander is known for his ability to traverse musical styles with the ease of an accomplished alpine skiier, and this year's releases are perhaps the strongest case for that yet. While it remains a keyboard-oriented album, STARS RAIN DOWN, has a decidedly hard rock and almost heavy metal feel to it courtesy of Norlander's magnificent European touring band consisting of traditional rock guitar, bass, drums and aggressive vocals. The release of SEAS OF ORION goes almost in the complete opposite direction with its pure usage of synthesizers and percussion. The dichotomy is pure Erik Norlander, an artist who continues to deliver the goods with grace, style and integrity.